Kale Haschek At age 17 Kale found passion in the vast possibilities of glass as an art form. Leaving his home to take the pilgrimage of the aspiring American glassblower, Kale arrived in Seattle, Washington. For eight years Kale worked for everyone and anyone from whom he could learn. Finding close friendship in a small group of like-minded glass artists, Kale’s skills moved forward quickly, assisted and inspired by the great work of his fellows. Working with such great artists as Martin Blank, Dale Chihuly, Aaron Thane Tate, Mikey Cozza, Dante Marioni, and David Bennet, gave Kale an in-depth, yet varied, experience.

After acquiring a degree of skill and confidence, Kale was able to secure himself as a leader of a production team of glassblowers, as well as a senior member of the Martin Blank glass sculpting team. Blank, renowned for his world-class glass sculpture, employed Kale as his dedicated metal fabrication artist where he created large scale, sculptural metal armatures to hold and mount his glass works. With this addition of blacksmithing-fabrication techniques, Kale gained a new appreciation for the flow of molten glass. Kale began to incorporate preformed geometric shapes into his organic work, and the result was a vast explosion of new patterns and textures that redefined and defied his conventional glass thought. He now works to combine the lure and complexity of traditional glass pattern with the raw power and chaos of the natural world.

In 2012 Kale returned to Willits, California, bringing with him a vast knowledge of the glass craft, also bringing the desire to share his passion with his home community. Kale creates his art locally and has displayed in numerous local venues. 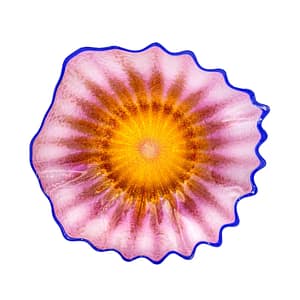