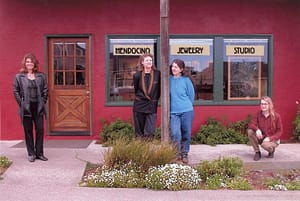 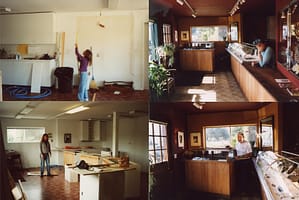 In 2001 I opened Mendocino Jewelry Studio on Kasten street, in the middle of Mendocino, with 2 other jewelers and multi talented artist, Jan Hinson. Jan has played an important role in the creation of each of my locations and I could not have done it without her support. Twenty-two years and three location later Mendocino Jewelry Studio made it to Main St. and now hosts fourteen local jewelry artists, three out of area jewelry artists, and 5 glass, ceramic and wall artists; all of whom I am very honored to call friends. The Northern California coast has an amazing amount of very talented artists and craftspeople and I am extremely appreciative to have a gallery space where I can exhibit their unique and superbly crafted work.

To see a listing of our featured artists and some of their work visit the ARTISAN’S page – better yet come by and experience our rich and diverse jewelry and artworks in person !

Nancy Gardner has been fabricating fine art jewelry in Mendocino since 1986.  As a child she spent hours playing with her grandmother’s jewelry, which was kept in a brown velvet box in the attic of their rambling big house on Wildwood Dr. in N.Y. state. After her first year in college as a ceramics major she took a large metal smithing workshop with Paul Tarantino at Buffalo State and fell passionately in love with metal and fire. While earning her degree she spent two years in Siena and Florence Italy studying art history, sculpture and silver & gold smithing. The final year of her degree she did an independent study in Lisbon, Portugal training under Tereza Seabra and Filomeno Sousa at AR.CO – Centro De Arte & Comunicação Visual . During her years in Portugal Gardner learned the craft of metal smithing from the very basics to the most intricate of skills. At that time students were unable to buy sterling in sheet or wire form but would purchase fine silver grain, alloy it into sterling and then fabricate all necessary stock to create a piece of jewelry or small sculpture.

Upon completion of her BA degree she was invited to teach at AR.CO where she remained until moving to Mendocino California in 1986. She has participated in a number of international and national shows and has taught silver & gold smithing both in Europe and the US. From 2011 to 2021 Gardner directed the jewelry program at the Mendocino Art Center, doubling it in size and capacity, creating a nationally recognized program with world famous instructors. The epidemic shut down allowed Gardner the time and space to reevaluate how her time and energies were being spent. The end result was the building of Outlaw Studio ~ a beautiful big studio at her home in the redwoods where she works and gives workshops. “I love teaching! Sharing what I have learned and practiced for so many years is a great delight to me. It is incredibly satisfying to turn a student on to the world of metal working and watch where they go with it.”

Becoming a single mom in 1999 left Gardner with few options to earn a living with her craft. The ideal situation presented itself with the opening of a small gallery on a semi cooperative basis, Mendocino Jewelry Studio. Set in the middle of town with retail access and where the kids could take the school bus to, she set up her workbench, display cases and opened for business. That was September 1st, 2001. Eleven days later the world changed ~ “The early days were quite a struggled to pay the bills but with the sharing of responsibilities on a semi cooperative structure survive we did” In 2004 Gardner, in her third location, assumed sole proprietorship and has been thriving ever since.With a particular attraction to Art Deco and Art Nouveau styles, Nancy brings a lifetime of technical expertise and an ongoing respect and love for her materials to her artistic process. Her one of a kind jewelry, much inspired by her elegant Grandmother, along with 14 other talented Jewelry artists, can be seen and experienced seven days a week at Mendocino Jewelry Studio.